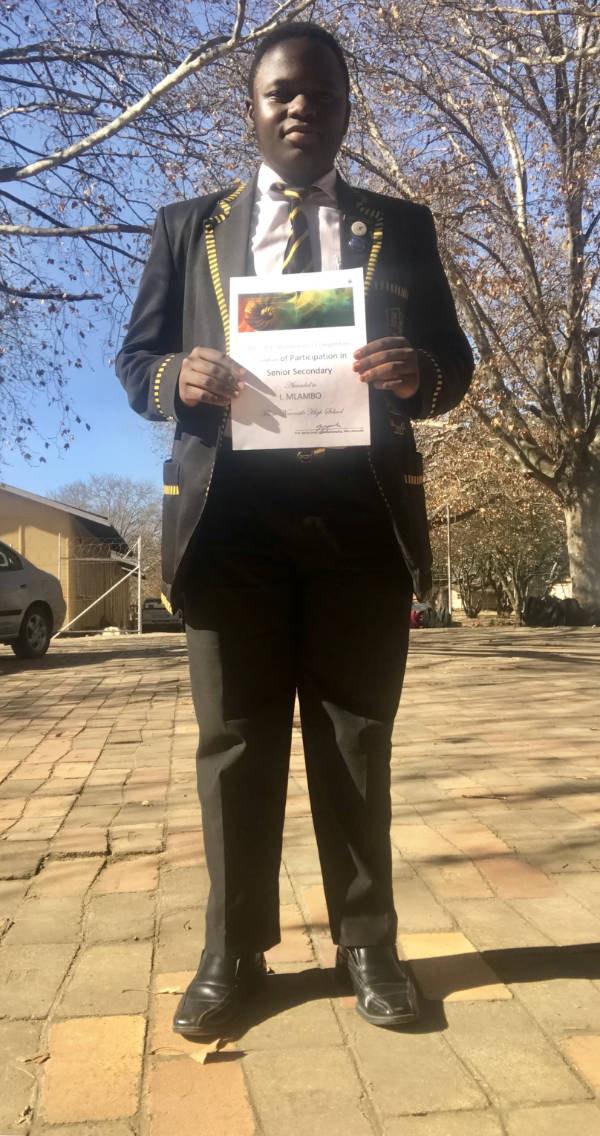 Pictured: Iziphozonke Mlambo with some of his accolades.

Iziphozonke Mlambo
The spotlight shines brightly on Newcastle High School’s Iziphozonke Musawenkosi Mlambo who believes in breaking boundaries all the way to success.
Iziphozonke earned the nickname of ‘Prophet’ at Newcastle High with his inspirational speeches. His spark of leadership began as a member of the RCL, a role in which he showcased great dignity and empathy. He has entered the Annual Eskom Science Expo for four consecutive years, with his highest accolade being a silver medal. Furthermore, he was featured in the Top 3of the National Leaderboard of the Siyavula 1-Million Maths Challenge. This earned young Iziphozonke a prize of R1200 in cash.

This extraordinarily gifted youth began participating ventured into the public speaking forum, winning first place at the National South African Literacy Association (SALA) Competition in 2018. His most recent accomplishment was to compete in the International Science Fair Competition which includes the best and brightest participants in South Africa and across the globe.
“It was a tough competition but the motivation and experience of my colleagues, family and teachers helped me to achieve all that I have,” said Mlambo after being awarded Highly Commended at the competition. “Newcastle High School is a school of excellence that will always provide opportunities and that means that there will always be room for me to improve and build on my skills.”

When asked about his best advice for fellow learners, Mlambo said, “The fate of tomorrow is based on what you do today. The power is in your hands!”