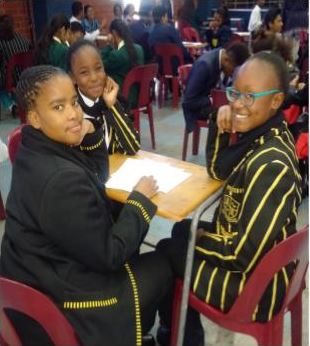 The Newcastle High School Quiz team went to New West Secondary School in Durban for the M.J. Naidoo annual inter-High Schools Quiz contest. NHS was represented by Nolwazi Sangweni, Hlelelwa Msibi and Luyanda Ndlangalala who outsmarted all other contenders at their school. Newcastle. Thirty-nine other schools battled it out for the MJN Trophy and the five thousand Rand prize money. The young trio comprising of only Grade nine learners impressed their teachers and surprised their rivals by making it into the top 15 with a total of one hundred points in a closely contested competition. The champions Star College for Boys, obtained a total of one hundred and twenty-four points followed by Sylvester Secondary school with One hundred and twenty-three points and on the third place was the host school, New West Secondary who scored one hundred and twenty-one points.

The NHS quiz co-ordinator Mr Bothwell Kadye thanked the three girls for representing NHS at this very tightly contested competition and for their exemplary conduct and giving nothing but their best in the competition. Asked what he thought about the NHS team, Mr Kadye had this to say “I am very proud of the teams’ performance, they have shown a great deal of resilience bearing in mind that these girls were competing against older learners some of whom are matriculants. I am confident that come next year they should be able do much better, well done girls you made us proud”.

When asked what she thought about the competition, the team captain said, I am very happy to be part of the NHS Quiz team and I look forward to the team doing better next year. I also want to thank my team mates for working with me very well, our teachers Mr B Kadye, Mrs B Zungu, Mrs Grewan Ms N Sibiya, Ms N Nkosi for preparing the team and of course our Principal Mr M Govender for affording us such an educational and enlightening experience. We came back different people from what we were when we left this place.